This summer I was blessed with the opportunity to visit and pray in Masjid Al Aqsa, the third holiest site in Islam. To say that I was anxious about this trip would have been an understatement. For years I had thought that given the political troubles in the region, visiting Masjid Al Aqsa would be completely out of the question. In addition, hearing how the Israeli government do thorough background checks on all tourists and have been known to send people back home with bans that last for years simply for sharing material that supports the Palestinian cause, constantly played on my mind since I booked the trip. Furthermore, the attack in July which left 3 Palestinians and 2 Israeli police officers dead and resulted in the entire Al Aqsa complex being closed to the public, did not help matters.

The five hour airplane journey from London to Tel Aviv consisted of lots of du’a in-between naps, and on arrival at Tel Aviv I was pleasantly surprised by the relative smoothness of the experience. Though myself and a few other young people were held back for questioning, we were cleared within a couple of hours and “Welcome[d] to Israel”; the usual waiting time is between 4 to 6 hours and can be up to 23 hours 59 minutes so you can imagine my surprise and relief.

However, upon arrival at the Old City, bordered by walls originally built by the Ottomans separating it from the rest of the city of Jerusalem, the heavily armed police presence highlighted the harsh reality of the situation in this region. Whilst the government seemed happy to welcome tourists to their country it was clear that they used every opportunity to show everyone that they were in charge. At least 10 armed Israeli army soldiers were at each entrance point into the Al-Aqsa complex and randomly groups of 10-15 officers would patrol the mosque compound itself.

The trip also provided the opportunity to meet Palestinians, who gave first hand accounts of what happened during the recent unrest in the city. We were informed of how the Israeli army searched the entirety of the premises, including the prayer hall and the Imam’s office, during the period that the complex was closed off to the public. For a total of two weeks, not a single salah was performed in the Masjid and not a single Muslim had stepped foot in the complex.

Read more: Everything you should know about Al-Aqsa’s “Day of Rage”

And this is not an isolated incident. While myself and other foreign tourists were being ‘welcomed’ by the police officers at the entrance to the compound each time we walked by, Palestinian men under the age of 40 are denied permits to visit the Masjid and restrictions are particularly strong against residents of Gaza and the West Bank.

Hearing these accounts from the people stirred up various feelings of anger, sorrow and helplessness amongst us Muslims tourists. It is one thing hearing about injustice on the news and quite the other hearing it directly from the people impacted by it. 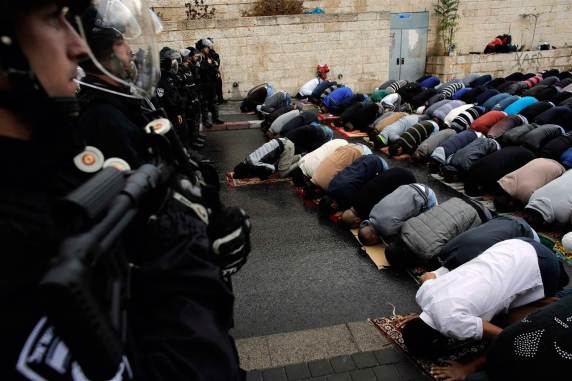 We all felt the need to do something to support our brothers and sisters in Palestine and to protect the sacred masjid that we had been blessed to visit. Discussions of what we as Western Muslims could do to support our brothers and sisters ranged from boycotting companies that support the oppression to encouraging people to come and visit the Masjid in order to increase Muslim presence in the area.

Though there is no disputing over the importance of Muslims visiting Masjid Al Aqsa, I was not convinced by the concept of tourism as a way to somehow protect or defend Masjid Al Aqsa. Whilst visiting the Masjid should be encouraged given the incredibly important status it has in Islam, presenting pilgrimage to the area, and what is ultimately a luxury trip we can thankfully afford, as a political move, risks brushing over the underlying issues that have resulted in the situation in the first place.

For example, during the recent unrest Turkish Prime Minister Erdogan urged Muslims who had the opportunity to visit Jerusalem should do so in a bid to “protect Jerusalem”. However, at the same time Erdogan’s son in law and energy minister had plans to build a gas pipeline with Israel. Whilst that plan is now off the table, why did it take Masjid Al-Aqsa to be closed to warrant that action? Why were such plans existent in the first place? Yes, since then Turkey has maintained a strong stance against Israel, but contradictory and ever-changing policies are common to all Muslim countries, who resume relations once tensions have calmed down.

With such issues present, increasing foreign Muslim presence in the country is not enough to counteract the political factors that legitimise the treatment of the Palestinian people and the occupation of Masjid Al Aqsa. Israel is happy to accommodate Muslim tourists, they rejoice when we use Ben Gurion airport; this is seen as a recognition of their legitimacy. How have we turned what is a trip for pleasure as much as a pilgrimage, into an act of aiding the Palestinians?

Looking into our history, this is not the first time that Masjid Al Aqsa has been at the hands of the oppressors. Each time, with the exception of the present day, sincere Islamic leadership is what has liberated the sacred site. Leadership with Islam at its heart and the interests of the Ummah before material benefit and other worldly gains is what brought success to the Muslims. This contrasts heavily with the attitude of leaders today that put their own national interests and economic and political gains above the interests of the global Ummah, instead calling for short term solutions which have no long term impact in improving the situation for the Ummah.

As Muslims on the ground level that do not hold political power it can be easy to fall prey to feelings of helplessness and despair however we have a duty to speak out against injustice. We must not be content with the way that the current situation is for Muslims in Palestine and other parts of the world. We cannot allow ourselves to be content with the empty words and false promises of our so called Muslim leaders. They must be held to account and we must demand greater action from them. Furthermore, we must not allow fear of being labelled prevent us from upholding justice. Our role model the Prophet (saws) did not allow the threats and sanctions from his enemies prevent him from working tirelessly in Allah’s cause and therefore should serve as an example of how we respond to the problems that the Muslims are facing today.

Afsheen Mehmood is a fourth year medical student who has just returned to studies after completing an intercalated BSc in global health. She is involved in community dawah and the welfare project of the Islamic Society. When not studying, she enjoys reading and watching horror movies

One thought on “To Palestine & back: Tourism will not save Al-Aqsa”