Seven years into the war in Syria, the conflict shows no sign of abating and the indiscriminate killing of civilians has become the norm. Yet despite all the atrocities the Syrian people has witnessed, the latest assault in the Syrian suburb of Eastern Ghouta have been particularly brutal and impossible to ignore.

Nearly 1,000 people have been killed over the past 20 days in the besieged enclave east of Damascus, yet the actual number of deaths is expected to be at least three times that figure, with journalists on the ground stating that the dead are buried so quickly that many times they are not recorded. Thousands more have been injured, with civilians taking shelter in basements and cellars, with male family members risking the continual shelling to buy food for their starving children.

Yet the situation in Ghouta is by no means new. The province has been under siege for the past four years, trapping 400,000 civilians, forcing them to turn to smuggling tunnels to buy basic foodstuffs. In September, most of those tunnels were also cut by the Syrian regime, causing widespread starvation, before the army launched a series of continued assaults on the neighbourhood, less than ten miles from the capital.

Homes, hospitals and schools have been targeted repeatedly by the Syrian regime, with aid provision heavily restricted. This week, after several attempts to enter the region, aid trucks arrived in towns, only to have been stripped by the regime of 75% of essential medicines, with many being forced to turn back without unloading their provisions due to the constant bombing.

The frequent use of chemical weapons in Eastern Ghouta has been yet another blatant violation of international law, but hardly surprising given the Syrian regime’s history of using such weaponry against civilians. Despite the US and Europe continuing to protest that chemical weapons are a “red line”, little to no action has been taken against the regime following numerous inquiries finding the Syrian government responsible for attacks that have killed over a thousand men, women and children.

Amidst all the death and destruction, Syrian opposition groups, who aim to protect civilians and secure their neighbourhoods from Assad’s army, have struggled to defend their former stronghold against the intensity of the latest attack. As a ground offensive is launched against the fighters, little can be done for those trapped in the region, unable to escape.

Eastern Ghouta is ironically one of four de-escalation zones established last May by Russia, Iran and Turkey in order to stem the bloodshed of Syria’s six-year civil war. However, the region has experienced near constant bombardment for many months, with aid provision restricted, leaving civilians struggling to survive.

As distant observers following the bloodshed from the comfort of our homes, we may feel that beyond making dua and giving charity, our reach is limited. Such feelings of helplessness are often strengthened when the reality of rebel groups is obscured, with many labeling it too complex to understand. For this reason, the discussion on most Muslim platforms has not gone beyond the humanitarian disaster currently unfolding, and the criticism of world leaders for their inaction. But little is otherwise done to encourage people to gain knowledge on this issue.

Whilst the Syrian conflict is certainly not simple, to whitewash the issue as too complicated to follow is to deny the importance of seeking the facts, supporting the truth and the people of truth; all of which are necessary in upholding the Islamic perspective on this and any matter. Furthermore, relegating the issue as too difficult to understand makes us more likely to accept the rhetoric of the mainstream news, which will always portray Muslims in combat, even when justified, in a negative light.

This war of misinformation has been used repeatedly in the Syrian conflict, with the media misinforming the masses, branding those defending themselves as extremists. As such, it’s common for even Muslims to hold the view that all Syrian opposition groups are unhelpful to the Syrian people. This broad brushing only distances the Muslims from the concern Islam mandates, of brotherhood and righteousness, and recognising the sacrifice of those who are risking their lives to protect civilians. This is one of the most highly regarded acts in Islam and one need to look no further than the life of our blessed Prophet Muhammad, peace and blessings be upon him, to see the merit given to defending innocent lives and the great rewards promised for those who accept the heavy responsibility.

Just as we support those who serve the Syrian people with charitable organisations, and humanitarian work, those who defend them with their lives also deserve our recognition and support. At the very least we can acknowledge their efforts and follow their endeavors. Broad brushing anyone’s efforts as entirely positive and negative is wrong, but we as Muslims abroad can make sincere dua to give those fighting for Syria unity within their ranks, guidance to the best actions according to Islam and victory over those who are responsible for the deaths of thousands.

Above all, its important for us to not lose hope. Allah has promised that the believers will be successful, and we must take heart from the Quran. 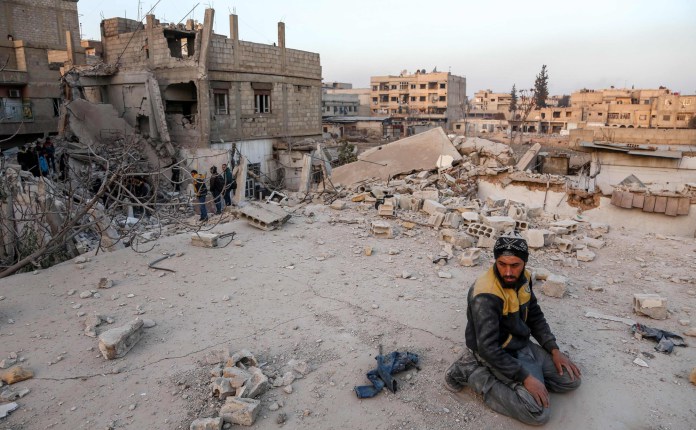 2 thoughts on “Ghouta: Why knowing the details matters”